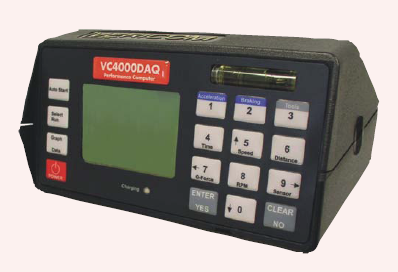 The VC4000DAQ is a data acquisition system that supersedes the VC3000DAQ which I've owned and used for four years. The VC4000 is a huge improvement over the VC3000, for a number of reasons.

The first big difference between the two machines is that the VC4000 has a three-axis accelerometer, to capture accelerations in all three mutually perpendicular planes of motion. It also includes a built-in, angular-rate gyroscope, for measuring yaw or pitch. It also includes a 360-degree magnetometer (compass). The sample rate (the rate at which data parameters are recorded) can be set as high as 1000 Hertz (1000 times per second), which is overkill for most accident reconstruction applications. (The VC3000 recorded at 100 Hz, which was adequate for almost anything.) Testing has demonstrated that the VC4000 is accurate to within one percent for the calculations of velocity and time as determined by the recorded acceleration (to the nearest 0.001G) and time (to the nearest 0.01 second).

This is a multi-channel recording device. It can be interfaced with GPS at 5 Hz. It can accept OBDII and CAN inputs--I currently have the OBDII interface. It can accept up to 16 inputs. Typical devices include a brake pedal switch, which marks in time when the brake pedal was first applied, and a perception-reaction-time system, which marks the time a particular switch is activated to determine the driver's perception and response times--I also have both of those. Other optional devices include external accelerometers to 100 Gs, external gyroscopic sensors, temperature sensors, brake-pedal-force sensor, and fluid-pressure sensors. Most could be obtained quickly with very little lead time if needed for a specific test or circumstance.

Although this device is not designed for universal crash testing, it could be very useful in low-speed crash testing or documentation. What delta-v did the stopped vehicle experience in that 4 mph bump? Put the VC4000DAQ in an exemplar struck vehicle and hit it at four mph with an exemplar bullet vehicle. Voila! There's your answer. The combined damages to the two vehicles may well be substantially less money than the allegedly injured party in the struck vehicle is seeking in alleged damages.

This instrument can be helpful to both defendants and plaintiffs. It can be used, for example, to demonstrate an effective rate of deceleration for a crash-involved vehicle or an exemplar vehicle at the site of the crash, providing data for the calculation of a narrow range of speed loss in skidding, which information may be helpful to either side involved in civil proceedings. It can also be used to demonstrate the handling capabilities or limitations of a specific vehicle at a specific site under conditions present at the time of the collision.

My charge for the VC4000 is $200 per use. If I use one of my personal vehicles for skid or sideslip testing, there will be a $30 per test additional charge for adverse wear and tear. (I won't use one of my vehicles as a bullet vehicle or target vehicle without prior agreement regarding repairs.) Generally, three skid tests should be conducted at a given location with an exemplar or similar vehicle to provide a data set which will thoroughly substantiate the use of a drag factor value or drag factor range.

In most instances, I use tabulated values for ranges of pavement drag factors when conducting my reconstructions. Now that I have this device, I will be able to narrowly define a range of drag factors, yaw or pitch rates, and other factors for most collision reconstructions, and I will have the scientifically derived data set to prove the validity, when such documentation is necessary..

If you wish to return to the home page, you may use this link.