Vetronix began selling Crash Data Retrieval kits around the year 2000. Bosch later bought the Crash Data Retrieval System from Vetronix, and that acquisition has provided for rapid growth. Bosch released Version 3.7 of the Crash Data Retrieval software in March of 2011; by March of 2015, the software was at Version 16.0. There typically are new hardware components and software components associated with each new release of software. Virtually all new vehicles manufactured by General Motors, Ford, and Chrysler have airbag or Powertrain Control modules with event data recorder capabilities which will record some pre-crash data, acceleration in two or three mutually perpendicular planes, and at least one non-deployment event in addition to a deployment event. A significant quantity of additional manufacturers have joined the group whose EDRs can be interrogated using the Bosch CDR System.

In the early days of airbag installation and use, modules which contained large capacitors were included with the airbag installations. The purpose of those modules was to fire the airbags from the electrical energy stored in the capacitors in the event that impact damages took the vehicle's battery out of service early in the collision sequence. Those modules typically contained a small memory chip which would record certain parameters at the time of the crash for the purpose of allowing post-crash investigators to evaluate the efficacy of the airbag system and other safety-related components. In General Motors vehicles, that initial module (DERM, for Diagnostic Energy Reserve Module) has evolved into the Sensing Diagnostic Module (SDM). In motor vehicles which have such recording capability, the generic term is Event Data Recorder (EDR). These recorders are generally, but not universally, included as an element of the Airbag Control Module (ACM), whose primary function is to fire the airbags when needed; data collection/storage is a secondary function of the ACM.

Since airbag deployment needs to be anticipatory rather than reactive, the SDM uses an algorithm to decide if the airbags will be needed and deploy them when appropriate conditions have been met. When the vehicle's parameters are such that the algorithm "wakes up" and "starts looking" to evaluate the severity of the event, the SDM can also record data. The GM SDM can record data for a non-deployment event, in which the algorithm was enabled but the airbags were not fired, and it will (in most cases) record a very useful collection of data when the algorithm has fired the bags. The instant when the algorithm "wakes up" is referred to as "algorithm enable" (AE). Most data values are recorded in terms of seconds or milliseconds before and/or after AE.

What does that mean to accident reconstruction? In many cases, the data contained in the SDM can significantly augment or reinforce the observations, opinions, and conclusions derived from a thorough investigation and reconstruction. The data stored in the SDM should never be used as a substitute for an accident reconstruction, but it contains information that may not be verifiable by post-collision examination. For instance, it typically records whether or not the driver's seat belt was buckled, whether or not there were diagnostic trouble codes present before the crash, and whether or not the brake pedal was applied during a time period preceding AE. 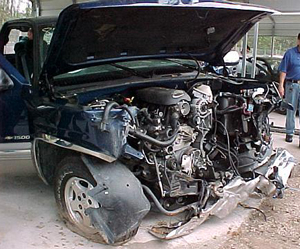 This photograph shows the front of a 2001 Chevrolet Silverado half-ton pickup truck which was randomly selected from among the collision-damaged cars at a salvage yard near Jacksonville, Florida. No data about the circumstances of the collision were provided or determined. It is obvious, however, that the collision was severe. The data set in this unit was extracted using a Vetronix Crash Data Retrieval (CDR) Toolkit, notebook computer, and other materials. The interrogation process, when properly performed, will not alter the data; it simply creates an image of that data on the hard drive of a notebook (or similar) computer. Hazards to data contained in ACMs are related to handling--bump one when it's "hot," and one or more new events might be recorded, possibly overwriting some or all of the data from the crash.

Vetronix Corporation, the same company which manufactured premium diagnostic equipment for professional automobile servicing and repair, worked closely with General Motors to provide hardware and software which would allow the end user to extract the data points contained in an SDM, examine them, evaluate them, store them, and print them. The graph shown below was part of the data contained in the SDM in the pickup truck shown above. Remember when examining this graph that no particulars of the collision are known, that the collision damage suggests that the truck's battery was destroyed early in the collision process, and that this graph is only a supplement to, not a substitute for, a reconstruction. 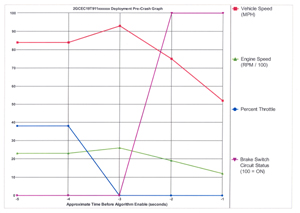 The Vetronix CDR tool kit was originally designed for use with late-model GM vehicles. Later, Ford Motor Company worked with Vetronix to allow access to data contained in their ACMs, which they call Restraint Control Modules (RCMs). By that time, many seat belt systems incorporated what were called pretensioners, which were components of the belt systems which would "fire" as airbags do, usually simultaneously with the airbags, and rapidly pull seat belt webbing tight over occupants. This increased the effectiveness of the seat belt and also reduced the likelihood of occupant injury from close proximity to a deploying airbag.

Now, select very-late-model products of the Ford Motor Company retain up to 25 seconds (some even much more) of vehicle operational data in the Powertrain Control Module (PCM). Owners of the CDR Toolkit who have maintained their hardware and software upgrades have been able to access the data in the PCMs for many years.

The CDR Toolkit provides a wealth of information about real-world crashes to the accident investigator. It also provides the answers to some questions that might not be determinable by any other means after a collision. Also, some very-late model GM products contain some interesting and useful data elements. One of them is engine torque. Some of the CDR reports contain steering angle as one of the reported parameters. Many of them simultaneously report transverse and longitudinal delta-v, allowing for a precise, numerical evaluation of the principal direction of force (PDOF), an important element in most accident reconstructions. Some of those reports from units which record transverse and longitudinal delta-v also include calculated values for peak resultant delta-v and associated PDOF, but those values will usually be wrong, because the software calculates the peak resultant delta-v as the vector sum of the peak delta-v in each direction, then calculates a PDOF based on the relative amplitudes of those values, but those respective peak values do not generally occur at the same instant in time. There often is an expanded data table which provides a wealth of other information, including a listing of up to nine diagnostic trouble codes present in the vehicle at the time of the event which created the record.

The graph shown in the section above had caused much confusion. For example, connecting the individual data points suggested continuity from one to the next, but experimentation demonstrated that events can occur between the time increments at which each data point is monitored and recorded, causing misleading interpretations. For that and other reasons, the graph was omitted from CDR Reports.

Vetronix is the company which developed the hardware and software for accessing data in ACMs, but it was purchased some years ago by Bosch. Immediately after the purchase, the equipment was still distributed under the Vetronix trade name, but Bosch gradually changed that to reflect the current ownership. The business structure under Bosch appears to be more rigid, which has advantages and disadvantages. But the hardware, software, and processes have remained the same in nature but have gotten much better. Good news for most of us!

Please call, write, or email whenever you have a question regarding motor vehicle collisions, components, crash data retrieval/event data recorder downloads, or other areas in which I may be of service.

Thank you for reading this article. If you wish to return to the home page, please click here.